It’s Illegal, Yet It Happens All the Time 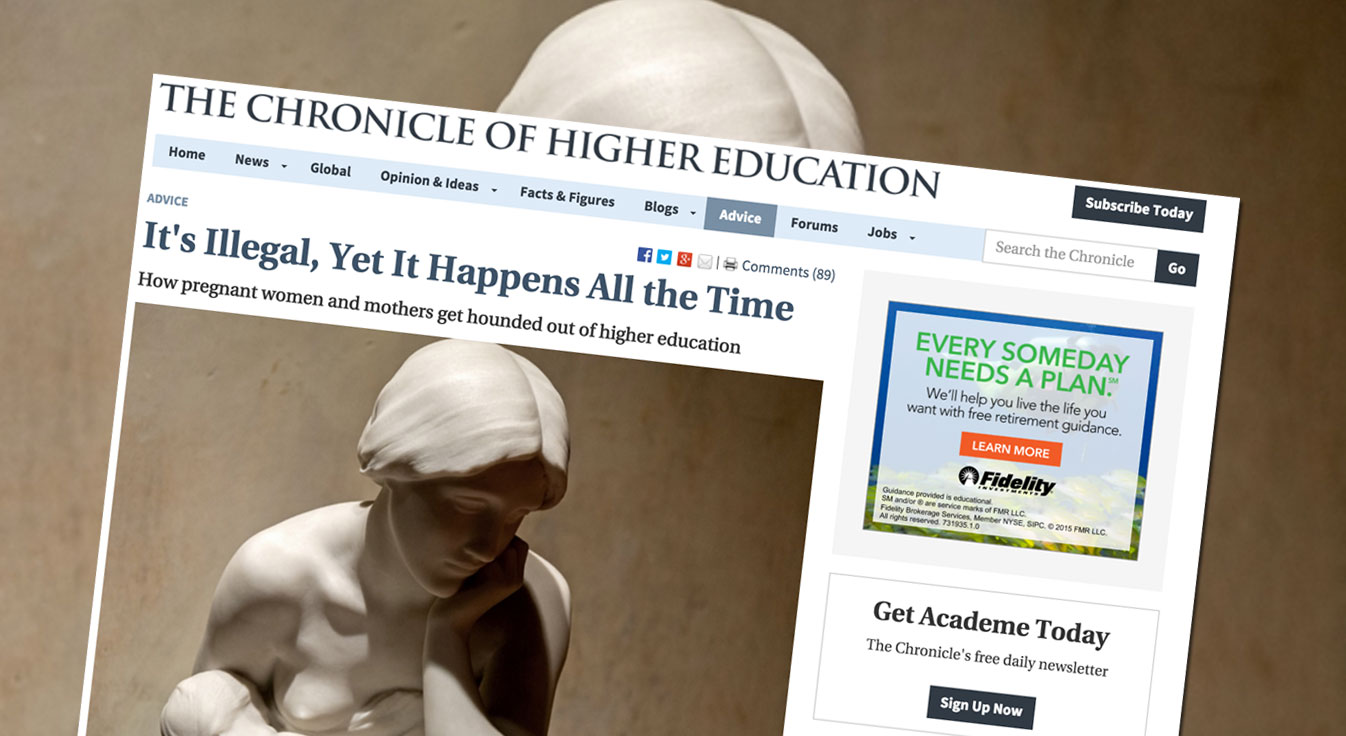 12 Jan It’s Illegal, Yet It Happens All the Time

Posted at 09:00h in Uncategorized by Jessica Lee
Share

How pregnant women and mothers get hounded out of higher education

Why don’t we have more women in STEM fields?

One reason is that students get hounded out of their college or graduate-school programs when they become pregnant. It’s against federal law, but it happens all the time.

One student told us she had a pregnancy-related disability that required her to go to the hospital at least twice a week. Exhausted but driven, she continued to produce quality work. Late in her pregnancy, the publishing deadline she was struggling to meet was accelerated by her department — it now fell right after her due date. Just months prior she had been celebrated as a rising star in her department, but now, she said, “I had to prove I was still worthy to even be in their program.” If she didn’t meet the new deadline, she would lose the funding her family relied upon. After her baby was born, she was intimidated into finishing her degree in significantly less time than the average student in her department. The hostility and bias the student faced “traumatized me in so many ways,” she said. “I wasn’t asking for accommodations, I wanted to be treated like everybody else, but I was the one who was punished.”

A graduate student with a disability caused by childbirth was pursuing her degree full force after a lengthy struggle, only to be told by a faculty mentor, “You don’t have a disability, you just need to go home and be with your baby.” Professors frequently make off-the-cuff statements — often written off as harmless — telling pregnant women or new mothers to stay home instead of pursuing their education. Plaintiffs’ lawyers love such direct evidence of gender discrimination.

And it’s not just professors who open their institutions to legal liability. Administrators do, too. A graduate student said she anticipated the birth of her child at the start of the academic year, so she asked to be able to record classes for the first week or two of the semester. The student-affairs dean told the student to withdraw for at least a semester, with no guarantee of readmission, informing her that all of the pregnant students at the institution in the past six years withdrew from the program — except one, who regretted her decision. This student, like many others, didn’t want to take leave at all.

The consequences of being forced out of your program can be grim. Many women need to keep working in their university-sponsored jobs to make ends meet. Yet those jobs are often unavailable to students while they are on leave, or aren’t offered back to them upon their return. On many campuses, being on leave or withdrawn status means losing that income, along with health insurance, loan deferment status, and even your university email address. Sometimes it means losing your housing, too.

Federal law requires that pregnant students must be reinstated following leave to their prior status, without penalty. Yet we hear over and over about women are penalized for their absence, or forced to reapply to their programs as if they had never been accepted.

Pregnant women who do stay in school often face an uphill climb in a hostile environment. One student’s climb was literal: To reach the nearest lactation room and not miss class, she often had to race across the campus and uphill. “I would run up the stairs leaking through my shirt, but I had to do it,” she said. Others try to hide their pregnancies: “I hid the fact that I was pregnant for a long time because I wanted to be sure I got a [teaching fellow] position,” said one student, echoing a common refrain. “I’m not sure I would’ve gotten the position if they would’ve known.”

“I was as sick as a dog, but I thought ‘I’m supposed to just do it,’” noted another student. She, and many others, did not know that she has rights under federal law — the right not to be discriminated against, and the right to simple accommodations that often pose little burden on the institution but make a huge difference for the student.

The path-breaking work of Mary Ann Mason has shown that Title IX requires institutions of higher education that receive federal funding (and nearly all of them do) not to discriminate on the basis of pregnancy or related conditions. The law prohibits the types of discrimination detailed above. Institutions are also bound by the Americans With Disabilities Act, which requires accommodations for many students with pregnancy-related conditions.

If a student chooses to take leave, she is legally entitled to it for as long as medically necessary, at minimum. When students take a medical leave, their institutions must allow them to resume studies without penalty, reinstating them to their status as of the time they left. Pregnant students who have complications or other disabilities incident to pregnancy must be given accommodations just as any other disabled student is. Moreover, the Department of Education has made clear that if your campus provides services to students with temporary medical conditions (such as homebound instruction), it must provide them to pregnant students. And, of course, any “mothers belong at home” hostility is blatant sex discrimination. It is illegal for the professors to do it, and for administrators to keep turning a blind eye to it.

We are working on an online tool kit for colleges and universities to help them eliminate pregnancy discrimination against students. Our tool kit will provide resources for students, along with training for professors, administrators, Title IX coordinators, and disability offices. Institutions could face major legal liability if they do not fix this problem.

At a more basic level, it’s absurd for all of these problems to continue. It does not make sense for a country to spend hundreds of thousands of dollars training a scientist, and then chase her out of her program because she becomes pregnant. Pregnancy discrimination among college and grad students is impeding our ability to attract women and people of color into science and other critical careers. Mused one doctoral student, “I previously wanted to be in academia, but now I’m jaded. This has totally turned me away from that.” Universities need to start offering these women the kinds of simple pregnancy accommodations that will keep them in school. That’s what students want. And that’s what the country needs.

Originally published on The Chronicle of Higher Education.