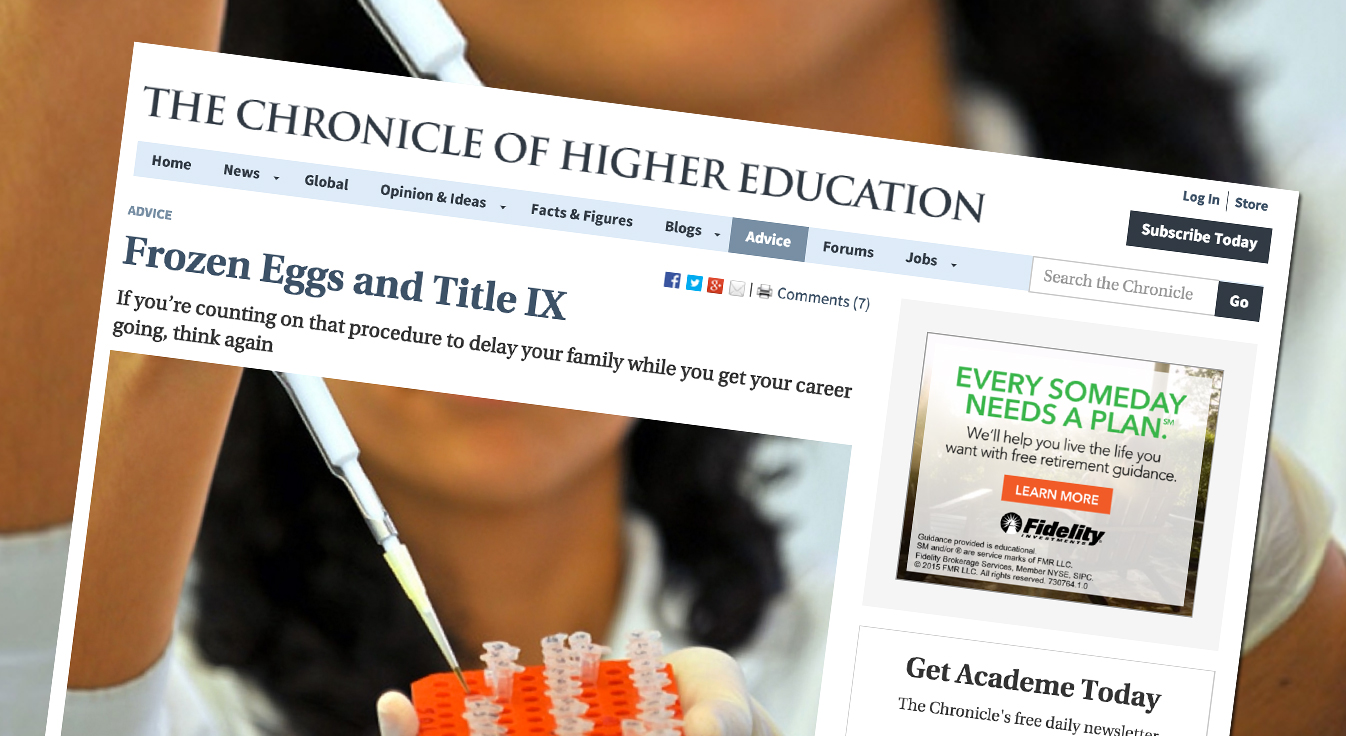 Posted at 01:36h in Uncategorized by Dan Mahoney
Share

If you’re counting on that procedure to delay your family while you get your career going, think again

his past fall, I gave a talk on work-and-family issues to a class of female students in the M.B.A. program at my university. As usual, in discussing the findings of the research my co-authors and I conducted for our Do Babies Matter? project at Berkeley, I mentioned the “baby penalty” that faces young women in fast-track professions. However, in the discussion that followed, a young woman volunteered a new topic — one that immediately captured all of our attention: “I need advice. I’m planning to freeze my eggs — it’s very expensive and the procedure, I hear, is painful. But I don’t see how I can plan a family until my career is going well.”

She had barely finished when another student interjected, “You don’t know if it will work at all: The technology is still sketchy.” Yet another chimed in, “I waited to have kids until I was 35. I thought I was young, but it was too late. It took five years to adopt.”

For these young women, this was an ordinary conversation, much like one their mothers and I — as part of the feminist wave of the ’70s — would have had about birth-control pills and abortion. The interest in egg freezing has grown since the American Society for Reproductive Medicine’s 2012 announcement that the procedure would no longer be considered “experimental” (its endorsement was partial and tentative).

Egg-freezing parties sprouted up on both coasts when Silicon Valley giants Apple and Facebook announced that they would be making the expensive procedure (about $20,000) available to employees as part of their medical coverage. Paying career women to freeze their eggs has practical financial advantages for companies. The obvious benefit: Young career women are less likely to abandon, or even pause, their career track to have a family.

We can and must allow talented women to pursue their education and career dreams without the illusory promise that they can wait indefinitely before starting a family.

Fertility clinics across the country began to leverage the 2012 removal of the “experimental” designation by suggesting that egg-freezing was now safe. But that is misleading. Eric A. Widra, co-chair of the reproductive society’s committee that made the recommendation, admitted in a 2012 PBS interview:

“We think it’s premature to recommend that women freeze their eggs to preserve their own fertility for later. But we recognize that there is a strong impetus to do so and if centers proceed with that service that we carefully counsel the patients as to the pros and cons.” He added: “So we would love to say, yes, please go and do this. But it comes with both personal and societal and scientific ramifications that we aren’t prepared to say we understand yet.”

The research on the outcomes of frozen (as opposed to fresh) eggs is slim. There is still concern about the viability of freezing and the effect on the health of the child. Until recently, the procedure was only recommended for cancer patients before beginning potentially-sterilizing chemotherapy, due to low success rates and high cost.

In an interview, Marcy Darnovsky of the Center for Genetics and Society said she was concerned that “a lot of fertility clinics — hundreds, really — are already aggressively marketing this procedure for elective purposes. … But I don’t think any woman wants to experiment with her own health or experiment with her children’s health. … We don’t have adequate data about either the short-term risks or the long-term risks of egg extraction.”

Why are so many women willing to face the risks, anyway?

In addition to the steep climb many new employees, particularly women, face in their first professional years, the career-bound female M.B.A. students whom I talked with clearly understood the “baby penalty” that occurs if they have a child in graduate school. The early years of an academic career are the most decisive in determining who wins and who loses. Female graduate students and postdocs who give birth are more than twice as likely as new fathers or childless women to turn away from an academic career in science.

Most receive little or no childbirth support from their universities and often a great deal of discouragement from their advisers. For many graduate students in their peak child-bearing years, pregnancy leave is granted at the discretion of their professor or adviser, if at all. With no clear campus policies in place, students are left with the default, what I often refer to as the “kindness of strangers” policy. But many strangers — e.g., faculty gatekeepers, rather than clear-cut university policies — are often not so kind.

As a University of California doctoral student told us, “When I told my adviser I was pregnant, he largely ignored me. He switched me off his high-profile research project in genetics and gave me basically housekeeping chores in the laboratory.” Another student, Jennifer Miller, who had her first child soon after completing her Ph.D. in neuroscience, said, “I don’t think I’ll ever be able to do a tenure-track job. … People were very up-front with me when I had my child. Looking around me, I see that people are completely shut out of positions because of family.”

But are frozen eggs the answer? No. We can and must allow talented women to pursue their education and career dreams without the illusory promise that they can wait indefinitely before starting a family.

Strong enforcement of Title IX’s pregnancy provisions will have the most impact on women and families in academe if coupled with changes in industry as well.

There is reason to hope. Our book Do Babies Matter? also revealed that the federal gender-equity law known as Title IX specifically covers pregnancy discrimination in education. The comprehensive anti-discrimination law, enacted in 1972, was for years known only for increasing the numbers of women and girls in sports, and is now being invoked across the country by survivors of campus sexual assault. According to the Title IX regulations, pregnancy discrimination is prohibited in admissions, hiring, coursework, leave policies, workplace protection, and health-insurance coverage in educational programs and activities.

Until recently almost no attention has been given to the needs of pregnant students in higher education. Most graduate students and postdocs — many in their prime childbearing years — aren’t even aware that Title IX covers pregnancy discrimination and maternity leave. Neither are many administrators. Neither was I. Although I was graduate dean at the University of California at Berkeley, I only became aware of this coverage well into my administration, when I discovered it through Do Babies Matter?

But times are changing. In 2014, California enacted a new law to insist upon Title IX compliance in preventing discrimination against pregnant graduate students and in leave policies for graduate students expecting a child. The legislation, Assembly Bill 2350, quoted our research and we supported it in testimony before the Legislature. Among other statistics, the measure states that “women who are married with children in the sciences are 35 percent less likely to enter a tenure-track position after receipt of their Ph.D. than married men with children, and they are 27 percent less likely than their male counterparts to achieve tenure upon entering a tenure-track job.”

It adds that “the same phenomenon has appeared in non-STEM fields, as studies indicate that married mothers who earn Ph.D.s are 28 percent less likely to obtain a tenure-track job than are married men with children who earn Ph.D.s.”

The new California law, the first of its kind, orders colleges and universities to comply with Title IX’s protections against pregnancy discrimination and offers protection beyond that for female graduate students. The law requires institutions to provide a minimum of 12 months of leave to graduate students for pregnancy or childbirth. It also includes leave for fathers and partners who are not the birth parent. That is a step far beyond Title IX, which only requires universities to provide leave for pregnancy, childbirth, and related conditions for as long as medically necessary.

Both Title IX and the new California law require that students who take this legally protected leave be allowed to return in the same status they held when they left — a far cry from the current practice of some institutions that make students reapply as if they had never attended the institution.

The most important impact of this new law, to my mind, is not just in the language itself, but the implementation. Students, postdocs, and even employees have long had rights to leave and accommodations under Title IX, but no one informed them of those rights or enforced them. With this new law and widening use of Title IX as a strong tool against sex discrimination, that is changing fast.

Along with Joan C. Williams and Jessica Lee — at the University of California’s Hastings College of the Law — I am working to provide resources and guidance to universities looking to comply with pregnancy provisions. We have created a new website — The Pregnant Scholar — that offers “an online toolkit for university students, faculty, and administrators on pregnancy and parenting.” Through our work, students are learning for the first time that they cannot be forced to withdraw from their university, to take substandard assignments, or to suffer in pain without the accommodations to which they’re entitled.

Moreover, they know that under Title IX universities must provide a complaint process through which students can enforce their rights. Students have been in a powerless position to challenge an all-important adviser. Now they will have a voice.

Strong enforcement of Title IX’s pregnancy provisions will have the most impact on women and families in academe if coupled with changes in industry as well. And on that front, too, there is hopeful news. The competition in the tech world for the most talented employees is now beginning to help families — not just with the questionable benefit of frozen eggs, but with a real commitment to workplace flexibility.

Recently Netflix joined the corporate charge to reform workplace culture by offering mothers and fathers up to a year of paid leave for childbirth. Amazon, Adobe, and Microsoft also announced increased parental-leave provisions in 2015. These announcements are largely aimed to attract in-demand highly skilled tech workers — and if academe wants to attract those people to graduate school, it will have to keep up.

The times, they may be changing.

Article originally published on the Chronicle of Higher Education.