As California Goes, So Goes the Nation? 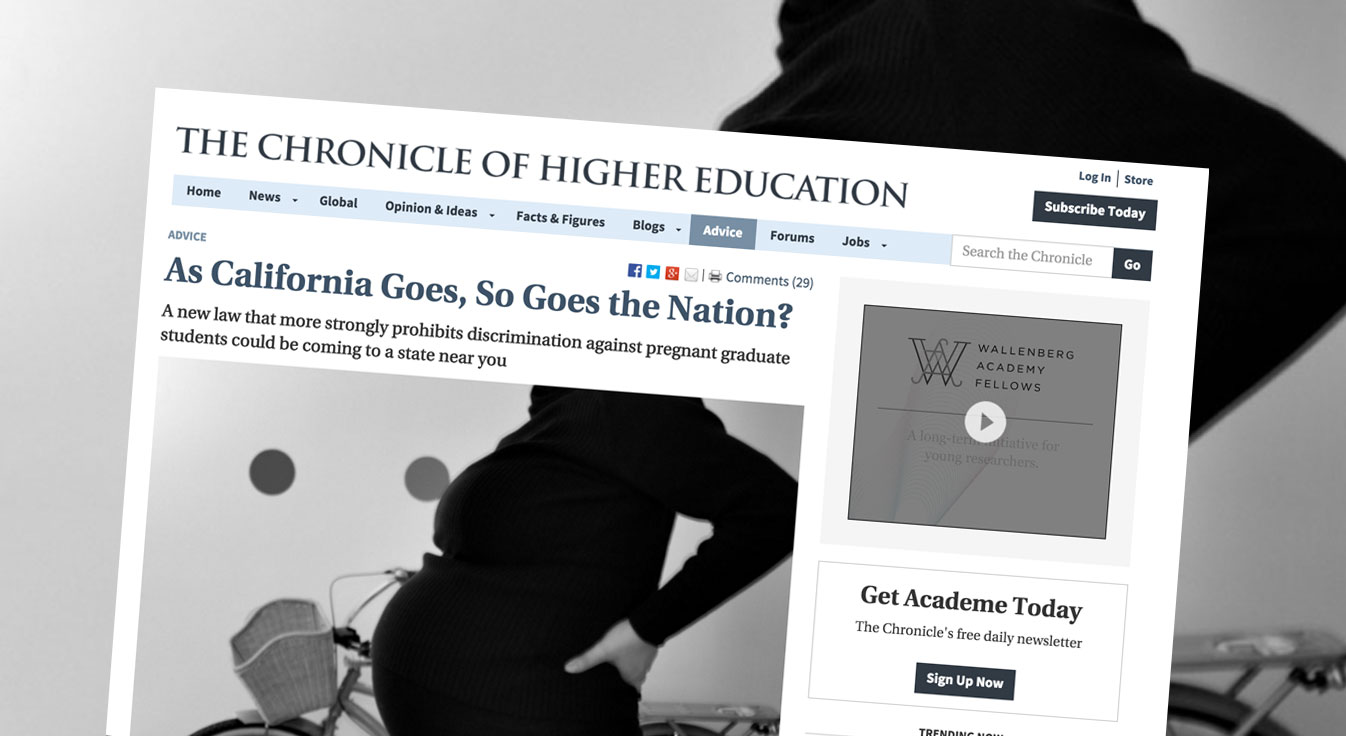 10 Oct As California Goes, So Goes the Nation?

Posted at 09:28h in Uncategorized by Jessica Lee
Share

This fall Gov. Jerry Brown signed two bills that could greatly improve the lives of women in California higher education, and serve as a model for the nation. Seeking to lessen the ambiguity that plagues sexual-assault investigations, the “yes means yes” law made California the first state to set a clear definition of when people agree to sex and attracted plenty of national attention.

Less heralded but equally important to academe was the second bill, also the first of its kind in the nation. It orders higher education to comply with Title IX’s regulations prohibiting discrimination against pregnant graduate students and offers protections beyond that, too. It will play a key role in helping female graduate students to achieve their professional goals.

Why did California have to pass a law to insist that academe comply with a 1972 federal law that already explicitly protected pregnant students from discrimination in such areas as admissions, hiring, and health insurance? Because almost no one in higher education recognized those protections—not even the students.

Some high schools had paid attention to Title IX because it had been used to ensure that pregnant students could finish their educations. But colleges and universities had paid scant attention until recently. Most people in academe believed that Title IX only covered athletes and, in just the past year, sexual assault on campus.

What does pregnancy discrimination against graduate students look like?

You can see it in the attitudes of some scientists who seem to believe that mothers cannot be serious scholars because academic science demands exclusive attention to research. A Berkeley postdoc in neuroscience who is also a mother confided to me that scientists had told her she would never get a tenure-track job, “and people were very upfront about that when I had my child.” In the 2013 book I co-wrote with Nicholas H. Wolfinger and Marc Goulden, Do Babies Matter? Gender and Family in the Ivory Tower, we related the experiences of women like Sherry Towers, a postdoctoral particle physicist. When she was pregnant, her adviser said that he would refuse to write her a letter of recommendation unless she returned from her pregnancy leave soon after giving birth.

The new California bill began its journey as an amendment last winter. Sarah Brady, a legislative staff member and recent Ph.D. in chemistry, emailed me, saying that her boss, Assemblywoman Susan Bonilla, knew of our research on Title IX and wanted to do something for pregnant graduate students. Our research work at Berkeley, mostly accomplished while I was dean of the Graduate Division, clearly shows that childbirth is the main reason why young female scientists drop out of the academic pipeline. The new law directly quotes our research: “Women who are married with children in the sciences are 35 percent less likely to enter a tenure-track position after receipt of their Ph.D. than married men with children, and they are 27 percent less likely than their male counterparts to achieve tenure upon entering a tenure-track job. The same phenomenon has appeared in non-STEM fields, as studies indicate that married mothers who earn Ph.D.’s are 28 percent less likely to obtain a tenure-track job than are married men with children who earn Ph.D.’s.”

In March, Sarah Brady, the legislative staff member, told me the amendment was ready and asked if I would testify before the state higher-education committee. She had lined up convincing support, mostly from student associations, unions, and women’s advocacy groups. I prepared my 34 slides and a killer talk. She told me gently that I had two minutes, but that the committee members had already received copies of some of my work. The bill passed that committee without opposition; in fact the members were enthusiastic. It sailed through a full Assembly vote and on to the Senate for a hearing and a unanimous yes vote. There it passed easily without opposition.

The new California law focuses on childbirth leave for graduate students, is more generous than Title IX, and includes fathers and partners who are not the birth parent. Title IX regulations state only that if an institution does not have a pregnancy leave policy for students (and few do), it must provide a leave for as long a period of time “as is deemed necessary by the student’s physician, at the conclusion of which a student shall be reinstated to the status she held when the leave began.” The new law states that a student may choose to take a leave of absence for childbirth according to the policies of the institution “or for a period of 12 additional months, whichever is longer” and can return in good academic standing. It also allows a graduate student who is not the birth parent to take a leave of up to one month.

Faculty and staff members are mainly well covered by state and federal laws regarding childbirth. The federal Family Medical Leave Act allows employees 12 weeks off for childbirth, and under California law that may be paid leave, based on disability insurance. The federally enacted Title VII (1964) which protects employees against discrimination in the workplace, and is supplemented by the Pregnancy Discrimination Act, offers employees strong protection for the kind of discrimination that the graduate students face.

Meanwhile, students’ only protection is Title IX but that protection has been generally ignored. Many graduate students work as researchers or teaching assistants, but they are not considered “employees” because they are part-time or contingent workers or trainees (and therefore are not protected under Title VII of the FMLA). These positions can be critical to their research and to developing their portfolios for future faculty positions, not to mention their ability to support themselves through the long years of doctoral education.

Women are often in graduate school during their peak childbearing years. Pregnancy leaves, if granted to them at all, are at the discretion of their professors or advisers. With no rules in place, I think of this as the “kindness of strangers” policy. Except the strangers (the faculty gatekeepers, rather than clear-cut university policies) are often not so kind.

The most important impact of this new law, to my mind, is its insistence that all postsecondary institutions are required to develop a written policy “on pregnancy discrimination and procedures for addressing pregnancy discrimination complaints under Title IX or this section. A copy of this policy shall be made available to faculty, staff, and employees in their required training. This policy shall be made available to all graduate students attending orientation sessions at a postsecondary educational institution.”

Students have been powerless to challenge their all-important advisers or professors. Now they will have a voice if they are willing to use it.

The California law is written only for graduate students, in part because promoting women in science under Title IX is a publicly stated goal of the Obama administration, and because our research focused on this group. However, students in medical, law, and other professional schools are also in their prime childbearing years and suffer similar discrimination.

And undergraduates have babies, too. A great many women, many not so young, at community colleges drop out before finishing a degree or credential when they have a baby. Their dropout rate is 64 percent higher than that of their counterparts who did not have children.

In facing the mandate of this new law in California, colleges and universities should understand that Title IX’s pregnancy-discrimination protection applies to all students. Policies may be adopted to meet the needs of each higher-education constituency, but it must be remembered that providing accommodation for pregnant students is not just a “good thing” to do, or just for California. It is federal law. It is time for all states to recognize this.

Mary Ann Mason is a professor in the graduate school at the University of California at Berkeley. She is the author of Title IX and Pregnancy Discrimination in Higher Education,published this year in the NYU Review of Law and Social Change. She is also the author, along with Nicholas H. Wolfinger and Marc Goulden, of Do Babies Matter? Gender and Family in the Ivory Tower (Rutgers University Press). The website for the book is Dobabiesmatter.com See also Toolsforchangeinstem.org for video presentations of their findings.

Originally published on The Chronicle of Higher Education.